Looking back on all the crafting opportunities my best friend’s wedding brought me has been incredibly fulfilling, and as the wedding craziness came to a close, there was one more project I wanted to tackle: preserving the bouquet.

This idea came to be because through all of my endless Pinterest perusing I kept seeing pictures of preserved bouquets, and so I asked Michelle if she had any plans for it and when she said she didn’t, I asked if she minded if I tried something, which she agreed to. I really didn’t know what I was going to do or how I was going to do it, but I had a few options in mind from my favorite pins:

I brought the wedding bouquet home with me from the reception and put it in water so that the flowers would survive while I figured out the action plan and bought the materials. I read that silica gel was the perfect medium to dry the flowers, and when I went to ask about it at JoAnn, turns out they have actual flower drying crystals. Since the wedding was in the spring, there were no Christmas products in stores, so I bought the clear ornaments from Amazon. The two final touches to complete the look were a thin burgundy ribbon to cover the line where the ornament comes together, and some copper/rose gold jingle bells because if you thought I wasn’t going to add some sort of rose gold element to this final wedding craft, you haven’t been following this journey very closely…

Below a quick gallery look at the steps to get the flowers dry:

I handled the flowers and the gel with latex gloves to avoid any skin reactions or allergies. I placed a layer of the drying gel as a bed in a long Tupperware container. Cut all the usable flowers and pretty leaves from the stems, and filled them with the crystals. I used the entire container of drying crystals. The instructions said to leave them for two weeks, but since I was mid-moving, I actually left them in there for over a month. When I took them out they were all beyond dry and after I shook off the drying crystals, they were ready to go!

The process of choosing the flowers for each ornament was pretty easy, I tried to make them all different and as filled as possible. I ended up being able to make six of them, and I think they turned out really cute! Which, I should say here that the original stunning bouquet is a creation of Ever After Floral Designs in South Florida. I’ve been to two weddings where they provided the florals and they were INCREDIBLE. (Note to brides: their bouquets are extremely elaborate and heavy, and will give you the arm workout of your life!)

The last step was to find a container to give them to Michelle, and I ended up finding the PERFECT one by looking around JoAnn and finding an empty box of a product that I later spray painted, you guessed it – rose gold. 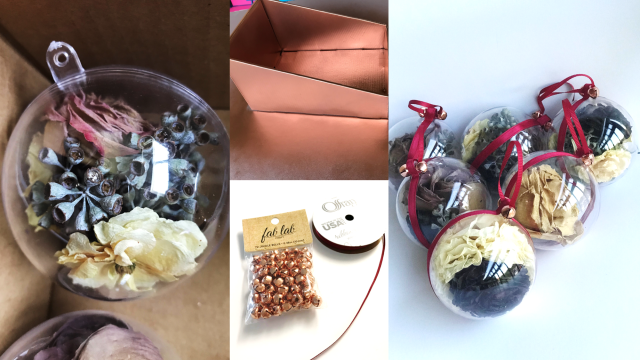 On the left you can see the variety of flowers and leaves I included in the ornaments to preserve the same look and feel of Michelle’s bouquet. In the middle are the rose gold box, jingle bells & burgundy ribbon, and on the right, the final ornaments!

Once the ornaments were done I did a trial fitting into the box and, guys – words can’t explain my excitement when I realized the ornaments fit PERFECTLY in that container I found in JoAnn, as if they were supposed to go in there in the first place. It was a total “eye-ball” guesstimation success. I added some shredded paper to cushion them and that’s all she wrote! The final product: Have any of you guys done a bouquet preservation project? Drop links to your pictures in the comments, I’d love to see some more cool ideas!

Merry Christmas and happy holidays everyone!

Back in 2012 when the world was going to end, my friends and I decided to throw an end-of-the-world ugly/tacky sweater Christmas Party on the night it was all supposed to go down – December 22nd, 2012. We had a great time, and it was one of the last times we “raged” like college students – most of our party time nostalgia goes back to how rowdy we were in 2012, so that was the last chance we got to show it that year.

Funny enough, the party became an annual thing, but it has evolved a lot from that first rager-style party, to a more sophisticated dinner/gift exchange situation with close friends. This year, it was my turn to host, and I really love to host events at my house and entertain my friends. The best part is, last week during my office Christmas party, I won a $300 gift card, so I was feeling all types of ready to splurge on this party. Let’s look back at what I put together for this fun night!

First of all, I decided not to put up a tree this year (again) because I’m leaving on the 23rd to Colombia, so there was no point in doing that, but that also meant I had to go the extra mile in creating the Christmas ambiance. Also, there were 11 of us total, and I was not going to move the big tables like I did for Friendsgiving two years ago, so with my newly acquired raffle gift card, I purchased a folding plastic table from Costco, which we already had one of. I also got an extra two chairs, since I had 10 at home. So sit down set up? Check.

This is crazy but, from previous set ups from other events years ago, I have two hollow cardboard columns in the garage that were already covered in red and silver fabric, so that decided my color scheme for the party. I brought out the two columns and put them by my mom’s room to block the door, and added a table there which would be where the gifts would go for the exchange. I didn’t put  up a big tree, but I did have a small white tree I used to use in my office cubicle, so I decided to add that to the table.

I made “snow” out of packing peanuts! Also included the candle favors with a little ribbon ❤

Within my fabric collection I found a piece I did not even know I had, which was long enough to cover the length of both tables stretched out lengthwise, and it was a beautiful red with silver polka dots, keeping the theme cohesion throughout.

For the silverware/cups/plates – I got the nice-looking plate set from Costco that is white with a silver rim and looks almost like china from afar, but it’s plastic. I got silver plastic cutlery, festive napkins, and for the cups I ordered these acrylic stackable stemless flutes from Amazon that were the hit of the party!

For the food, since it was 11-12 of us, I decided to get Olive Garden’s buffet catering for 10 people (there’s always more food than necessary), and it was perfect. No cooking, they deliver and set up, all for $115.

The delivery guy from OG did the buffet line set up and they included the trays, tongs, even brought plates, napkins and cutlery for all!

For the final touches, I got some white and red roses to create thin centerpieces, using some silver leaf stems I had from decor in previous years, and I also got a small candle favor for everyone that smelled like gingerbread cookies!

For the gift exchange, I set up our Secret Santa on Elfster (an amazing one-stop shop platform that does all the sorting work for you), and everyone walked out happy with gifts they had included in their wishlists. I’d say this Friendsmas was a total hit!

Loved collaborating on this seating chart with @kustomkreationsbyk for a stunning wedding at @historicwaltonhouse this weekend! 📜 Wood is not usually my medium so this was quite the challenge, but the final result was worth the effort 😍 ✂️ Karissa had a beautiful design in mind, and I’m so happy to have worked on this with her to bring her vision to life. Thanks again for your trust K 🤗 • Vinyl cut with @officialcricut • • • • #WCB #WCBCraftStudio #handmade #supporthandmade #shopsmall #shoplocal #Etsy #EtsyShop #EtsySeller #EtsyUSA #craft #crafter #MiamiWeddings #HistoricWaltonHouse #Homestead #SeatingChart #WeddingSeatingChart #WoodenSeatingChart #YourSeatAwaits #MiamiEvents #SouthFloridaEvents #WeddingPlanning #RusticWedding #vinyl #oracal651 #januarywedding #blog #blogger
Merry Christmas + Last post of 2018! 🎄 The last thing I wanted to share from the #MyBestFriendsWedding crafts series were these ornaments I put together with flowers from her gorgeous bouquet to preserve that bit from her big day. 🌷 All tips and instructions on the blog, link in bio! 📖 Last but not least, I wanted to take this opportunity to thank my biff @meech_89 for the trust to help bring your vision to life! I didn’t have a lot of experience making a lot of these things and you gave me a clear footprint with free range to make it happen 🤗 • 💐Flowers from @everafterflorist • 💣Ornaments from @amazon • 🛒Drying crystals, ribbon & jingle bells from @joann_stores • Designed & crafted by @wcbcraftstudio 🥰 • • • • #WCB #WCBCraftStudio #handmade #supporthandmade #shopsmall #shoplocal #Etsy #EtsyShop #EtsySeller #EtsyUSA #craft #crafter #MeantToBPineda #MiamiWeddings #BestOfMiami #MiamiEvents #weddings #weddingcrafter #diywedding #weddingplanners #blog #rosegold #coralgableswedding #bouquetpreservation #christmasornaments #DIYornaments #weddingbouquet #weddingbouquetpreservation
Well... if you asked me what I’m most proud of ever making, what gave me the most grief, what also gave me the most fulfillment to see when done... This is it. 🤗 This is the reason I didn’t sleep for three months leading up to the wedding. I don’t know why I felt this way, but I was terrified of making this seating chart, and it caused me severe anxiety and insomnia. 😬 The crazy thing is, between buying the materials, planning out the scheme, making the structure, weeding each table list, mounting them on the glass, securing the frame onto the easel, taking it to the venue, fix final touches... this probably took close to 30 hours to make, all for one hour of use... 😳 I literally couldn’t get over that and so I spent most of cocktail hour taking pictures of people looking at it 🤣 swipe to see that! • This is on the blog (link in bio) but I think I might just write one more post exclusively focused on it that helps put into perspective what a massive undertaking this was. • 📸 Photography from @simplycaptivating • ✂️Cut with @officialcricut (adhesive foil from @officialcricut as well) • 🖼 Frames from @hobbylobby • 🔭 Easel from @amway (painted rose gold, you know the drill) • Designed & crafted by @wcbcraftstudio 🥰 • • • • #WCB #WCBCraftStudio #handmade #supporthandmade #shopsmall #shoplocal #Etsy #EtsyShop #EtsySeller #EtsyUSA #craft #crafter #MeantToBPineda #MiamiWeddings #BestOfMiami #MiamiEvents #cricutmade #weddings #weddingcrafter #diywedding #cricut #weddingplanners #blog #rosegold #coralgableswedding #seatingchart #frames #weeding #adhesivefoil #cocktailhour