My friends and I decided to be royally extra this past weekend, and have a watch party for the Royal Wedding of His Royal Highness, Prince Harry and his new bride Ms. Meghan Markle aka Her Royal Highness, Meghan, Duchess of Sussex. The event was everything you could’ve expected, and so, so much more. No detail was spared and the love was felt throughout social media. Our watch party I mean!

Ever since the engagement, our group chat has been non-stop with every appearance and detail revealed about the royal affair, and we were READY for what was sure to be an unforgettable event. As we inched closer to the day, I found an invitation online for a “Fancy PJs and Fascinators” sleepover/watch party and I knew immediately we had to do the same. I shared with my friends and OF COURSE we were all 100% on board with getting ourselves some cute fascinator hats to wear so we could be part of the day, even with an entire ocean standing in the way.

Since I’m still in the process of moving and much of this has been a huge undertaking as a de-cluttering experience for me, I didn’t want to buy a hat. The good thing is, I have materials of all kinds and I was sure I could pull something together with what I already owned. So I pulled out some fabrics, ribbons, headbands, and my trusty styrofoam head, and got to work.

I decided I would either do something in purple or gold because 1. duh, royal colors and 2. I probably had the biggest amount of materials in those colors. I started playing around with fabrics to see how they could bend, and which could sustain a form once pinned down, arriving at two very different options. The gold one was my least favorite, as it looked good on the styrofoam model, but not on me 😦 #bigheadandforeheadproblems. I thought it looked quite chic and it made me think of Victoria Beckham a little, but it was a no-go for my head. 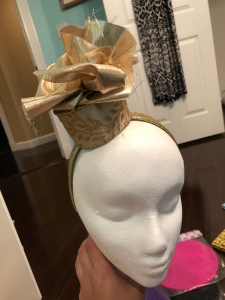 I moved on and decided to focus on the purple one. I had a bunch of tulle circles (from honestly I don’t know when or for what I bought them) which I noticed were holding shapes, so I stuck to playing with them. Some folds, twists, and a few pins later, I arrived at my final product. To be honest, I think it kind of looks like a loofah but I also love it, so I called it a day and proudly wore it to the watch party. For the fancy PJs, I wore the set that my friend Michelle got as a gift for the bridesmaids to get ready in the day of the wedding. And without further ado, here are the final shots! 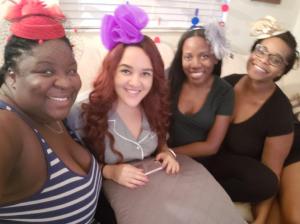 My friends all got theirs off of Amazon, and though I was tempted, I’m glad I stuck to my DIY option and I love the outcome. Did anyone else have a watch party/got or made fascinators? Let me know in the comments, I’d love to check out pictures from fellow royal subjects!