My oh my oh my… if there’s one place I can see myself living in, it’s San Francisco. Fresh off the plane, I can’t even begin to describe the epicness of this trip. I’m making up words to explain it kind of amazing. Where shall I begin?

About two months ago, maybe a little more, my sorority little sister Ana and I were talking about how badly we wanted to take a trip together (I don’t think we’ve flown anywhere before this), and she had just been to Sonoma with a few friends, and her withdrawals were very very real. I, on the other hand, was on track to quit my job and wanted to start my newly found freedom with a bang. San Francisco and Chicago were at the top of my to-do list so we said – let’s do it, and so we did! The trip would also coincide with Ana’s birthday. Birthday, job-quitting, & drinking. What a trifecta!

We would spend two days in San Fran, then rent a car & drive to Napa for the weekend, and come right back for another two full days in the city. Done and done! We began booking hotels, making lists of must-see places, asking for recs and before we knew it, we were taking off! We ended up doing the trip with my grand-little Laura, and Ana invited a friend from work (Erica) to join us as well. When I went to New Orleans last year, I kind of jumped on the trip very last-minute, so I just went along with what everyone else had planned and didn’t care to look up things beforehand. This time around, my Type A self went full-force and created almost an hour-by-hour itinerary for each of the days, which didn’t pan out exactly as planned because of some misinformation, but it worked itself out. Without further ado, here is the rundown of our glorious six days in San Francisco!

(Side note: I linked all of my Trip Advisor reviews here so I don’t go into too much detail and make this longer than it already will be!)

(Side note 2: there are a lot of stories of taxi and Uber drivers. This city is full of either ridiculously friendly or at least very interesting drivers!)

We flew out of MIA at 6:00 am, had a layover in IAH and landed in SFO around noon. Laura and Erica were in separate flights, so we waited for them to land and promptly headed to our hotel, King George on Mason street, just a block from Union Square. A friend of Erica’s that lives in the city met up with us and walked us over to Colibri Mexican Bistro for a quick lunch and some great margaritas, and then it was time for us to tourist around on our own. We made our way down to Fisherman’s Wharf to regale in some happy hour drinking at Lou’s Fish Shack, and then, the long-awaited moment in every 90s kid’s life when, after years of watching the Full House credits, you get to see the Golden Gate Bridge in its full glory. We got in an Uber to Sausalito for our dinner reservation, and when our driver heard we had literally just gotten off the plane a few hours before, he made extra stops to show us the best angles to catch the bridge, and took our pictures. He was awesome! It was breathtaking, everything we’d hoped for, and so so much more! We got to our dinner reservation at Le Garage, which was very nice but to be quite honest, between the little pre-travel sleep, the jet lag and our early jump start to drinking, we probably were too exhausted to properly enjoy the experience. At that time, Uber was having a massive surge so we decided to have the restaurant call us a cab. We’re picked up by an older cab driver wearing fingerless biker gloves, with a big bulky bag in the passenger seat. I make nothing of it, but later find out that Ana and Laura were immediately skeeved out by it. As we’re driving back, the driver finds out it’s our first day in town, and he tells us he’s going to show us THE BEST view of the bridge in the whole city. I’m elated, but Laura and Ana are beginning to actually worry as he goes off the main road and up a deserted and dark hill, straight out of a scary movie. Fortunately, our driver was just a very nice guy and did show us a stunning night overhead view of the bridge and San Francisco, and got us back to our hotel, safely. 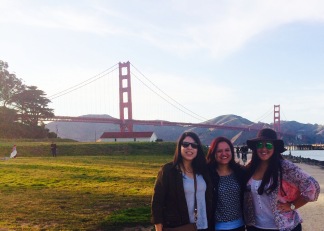 An unforgettable shot from our first awesome Uber driver

Just realized this almost looks the same as our day-shot, but this is actually from the opposite side, probably from the mountain that’s in the first shot!

We started with breakfast/brunch at this place called Plow, recommended by a friend, and it was just so SO so good. I want to go back already for more. Afterwards, it was time to bike through the Golden Gate Bridge! Now, for the novices like myself – when Ana told me we were biking through the bridge, I imagined there would be a bike station on either side of the bridge where you would bike from one end to the next, and that was that. Nope. Not the case at all. There are countless bike rental spots in the Fisherman’s Wharf, where you pick up a bike and ride it (sometimes upward) all along the bay. Then you make it to the bridge, and then it’s a trek of three miles mostly downhill to Sausalito. I for one am not in the greatest shape ever, and that was a little more bike-riding than I wanted to do. Ana was fresh off some resistance training with Orange Theory so she had a completely different experience (lol). They tell you if you don’t want to bike back (and we didn’t) we could take the Ferry back from Sausalito to the city. As soon as we arrived in Sausalito, we bought our Ferry tickets. We walked around the beautiful picturesque town, and ended up having a late lunch at Poggio. When it was time to come back for the Ferry, the line was INSANE. Like we were never going to get on a boat, and we were wasting daylight. So we decided to hail a cab instead. This was another interesting ride where it wouldn’t do it justice to say the car smelled like teenage spirit… but the driver was Haitian and so I decided to practice my French during the ride to pass the time. We arrived back at the Wharf, returned our bikes and then started walking around thinking about what to do. We passed one of those stands where they sell you tickets to the double-decker buses, and decided to ask the guy for advice on what to do (it was too late to get on a tour at that time). He recommended we keep going west on Beach Street, make a left on Hyde Street and walk up until we hit the top of Lombard and its crooked hill. Take the photo opp, and then go down the curves until we hit Columbus, where we’d find a bar/cafe with $2 drafts to make up for the hiking. YES PLEASE! We did exactly that, and it was awesome. We got very drunk at 901 Columbus Cafe, where we ushered in Ana’s birthday at 9:00 pm PST, because it was midnight on the East Coast. From there, I frankly can’t remember if we walked or Uber’ed to Bangkok Noodles & Thai B.B.Q. where we had some yummy food, and then headed back to the hotel to go to sleep because we had to be up at 6:00 am to drive to Napa. 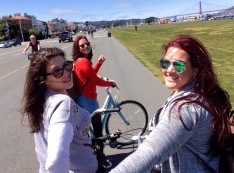 Making our way to the bridge through the Bay 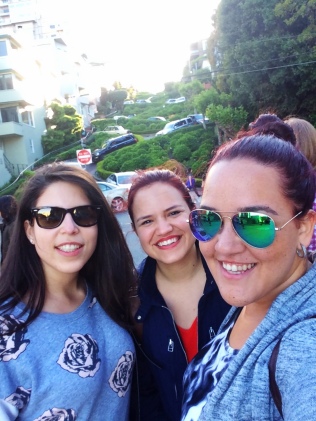 At the bottom of Lombard

Saturday, April 11th & Sunday April 12th – I’ll do separate post for Napa because this is already too long and we have two more days in San Fran to cover!

We resisted the urge to go back to Plow for breakf – just kidding. We couldn’t resist, but it closes on Mondays so we didn’t have a choice. We had lots of recommendations and opted for Sweet Maple to try their world famous Millionaire’s Bacon. I’m not big on bacon (don’t @ me), but everyone else seemed to enjoy it. After the breakfast, we decided it would be appropriate to do a double-decker tour around all of the city, since it was a BEAUTIFUL day. What people don’t know is that even though Chicago got the “windy city” nickname, San Fran is actually very much up there trying to take the title. We were FREEZING on the top deck with all the wind and couldn’t find enough fabric to cover ourselves with during the tour. Other than that, we managed to get on a bus with an AWESOME tour guide, I believe his name was Luca (?), and he was so funny. Those guys really make or break the tour. Once we got off, we had lunch at Bistro Boudin so we could enjoy some legendary sourdough, and then went around the Wharf walking looking for something else to do. We arrived at Madame Tussaud’s and I have to say, that was my first and last experience at a wax figure museum. Nothing wrong with the place, but the figures are too creepy for my taste. Never again! But the staff was super mega friendly so that’s definitely a plus for them. We decided to close the touristing around with a little tour of the Ghirardelli factory, and then headed to a nearby Walgreens to get some souvenirs.

Laura and Erica both left on Monday, so it was down to Ana and me for the last day of activities. We went back to Plow because we had to, and we could, and we haven’t been more proud of a decision in our entire lives. Then we headed down to the piers to see if we could get on a tour to Alcatraz, but now we know those things are booked at least a week in advance. We decided to do the “Escape from the Rock” tour with an award-winning narration of the attempts at escape from the prison, which was very interesting, and it was an all-around awesome experience because at that point we’d biked through the Golden Gate Bridge, driven through it, and now we were sailing under it to spend a few anxiety-ridden minutes taking in the vastness of the Pacific. It was an awesome experience. When we got the tickets the tour was still about an hour away, so we decided to walk over to Pier 39 to say hi to the seals. Interesting creatures! Then, we went to get our fill of tourism basicness – taking pictures in front of the Painted Ladies, going to the ACTUAL Full House house which the owners painted purple to try and dissuade tourists from finding it, but you can’t fool us all! And then, we decided to close the trip with a recommendation from Pinterest of restaurants with the best views to visit in the world, so we made our way up to the 39th floor of the Marriott Marquis San Francisco to enjoy a drink (or two, or three) at The View, and say see you later to this beautiful, welcoming and incredible city we got to enjoy so much of! 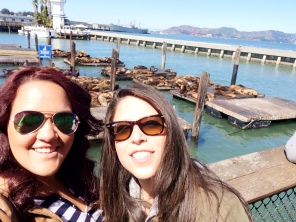 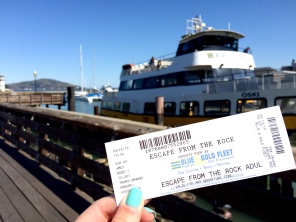 Escape From The Rock Tour

About to cross under the bridge!

Painted ladies in front of the Painted Ladies 😉

Heading up to The View 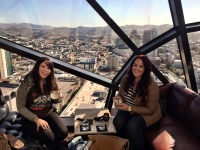 2 thoughts on “#TravelTuesdays – An Unforgettable Week in San Fran!”