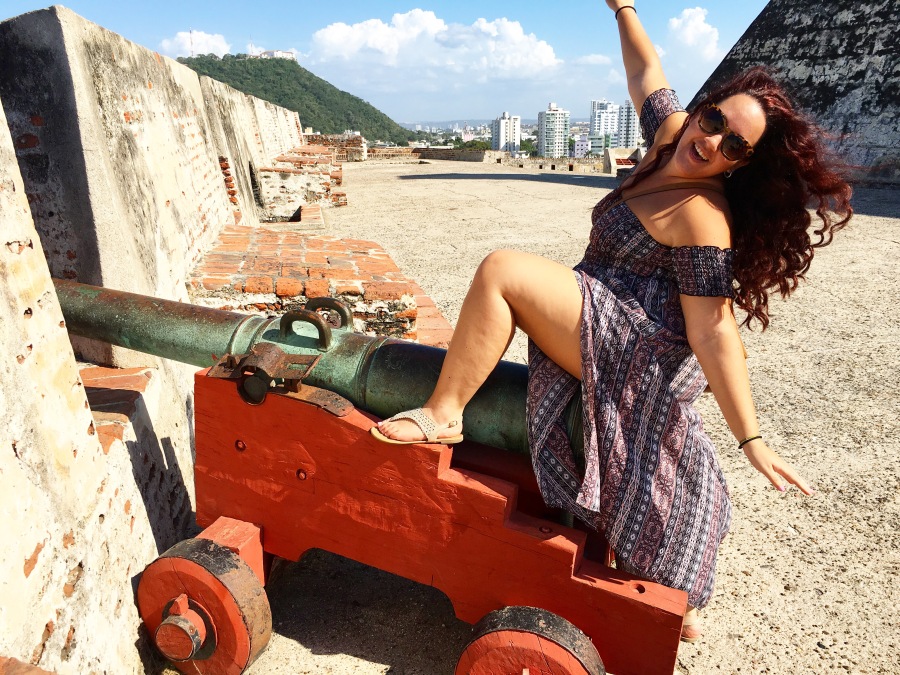 For those who do not know, my mom is Colombian and my Colombian heritage is very strong and kept alive by constant visits to this beautiful land I’m blessed to call one of my homes. I was born in Venezuela, but I’ve spent a good chunk of my life and gone through some important milestones while on trips in Colombia. The only thing is that since 99% of my family is from and lives in Santa Marta (the oldest city in Colombia, a coastal town next to Barranquilla), that’s pretty much the only place I go to and truly know. So when my friend Iselle told me she wanted to celebrate her birthday in Cartagena, I was very excited for the opportunity to finally expand my horizons and see another part of this homeland of mine!

My friend Ashtine was having her engagement party in Miami on Friday, December 23rd. I booked my flight to leave on December 24th at 2:00 am, meaning I went straight from Ashtine’s party to the airport. Landed in Santa Marta on the 24th around 11:00am, minus my carry-on which they made me check at the door and they lost in Bogota, but it thankfully arrived in the afternoon! Stayed in Santa Marta until Friday, January 13th, when I went to Cartagena by car (it’s about a three-hour ride), and after spending the weekend there, flew from that airport back to Miami. So when I booked my flight, it was:

Now, on to the action: Hola Cartagena! When I agreed to the trip, I honestly didn’t know what to expect. I’d heard a lot about Cartagena’s “ciudad amurallada” or walled city, which is where the historic downtown festive area is, surrounded by a wall (hence the name), and because I’m so used to Santa Marta, I expected a similar vibe. The first thing that I will tell you I assumed and was DEAD wrong about was that Cartagena would have beautiful beaches. NOPE NOPE NOPE. Santa Marta has dozens of beautiful beach locations, reachable by car/boats/hikes, in every direction. Cartagena is surrounded by water, but the tide is very high and the wind makes tons of little sandstorms, and there really isn’t much “beach” space per se. You have to sail off to find a semi-decent beach, and even then, it’s just not good. More on this later. Let’s go day by day –

Iselle, Ian and I were the three amigos embarking on this trip. Ian and Iselle were flying in separately, and I was driving in. They both arrived at the hotel before me, and went off to wander around. Iselle found a deal for us to stay at Casa Cordoba Roman (or Casa Roman, it has a few different names), a house type of place. Our room had a nice balcony, two stories, and space for about 4 people to sleep comfortably in a king bed, and two twin-size mattresses. Iselle and Ian found a bar and some wifi and texted me so I went to meet them there. We had some drinks at Plaza Santa Teresa and kicked off the weekend festivities. Went off for some yummy dinner at Juan del Mar, went back to the room to drop our leftovers and then went to check out the bars and nightlife. The place that stood out the most to me was Alquimico. Perfect libations spot for some new and exciting drinks! Went to a bunch of random bars all within the walled city, and since I was still not tired when we got back, we went up to the rooftop of Casa Roman to take a night/morning swim before bed. Just what the doctor ordered! 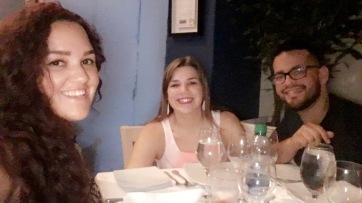 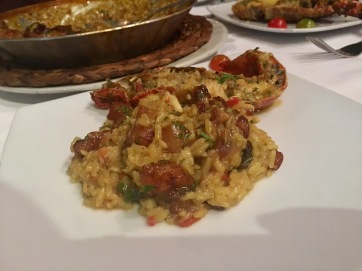 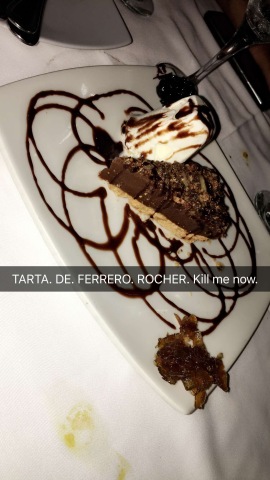 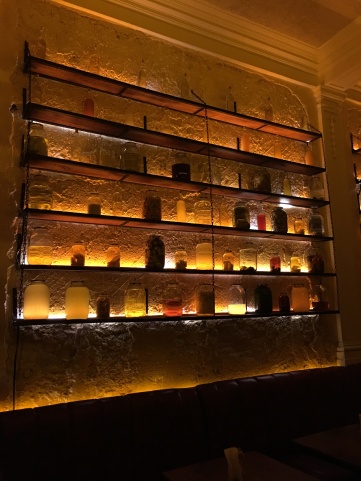 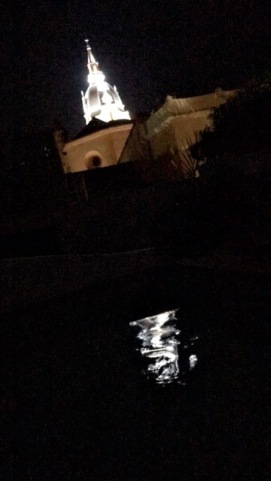 The view from the pool of the hotel rooftop

We woke up “early” (8ish) with the goal of checking out Islas del Rosario (Rosary Islands), which I’d heard very little about, other than you got there by boat, which I was very used to doing in Santa Marta. When we got to the information spot, it was like 9:30, by which time the boats are gone. It’s also a 45 minute-1 hour boat ride, so it was not what I was used to or expecting at all. But now with our newfound information, we knew to come prepared tomorrow. We ended up meeting up with one of Ian’s friends who is a local in Cartagena, and he took us on a walk outside of the Walled City for us to see more of the Cartagena every day life. We decided to go to the Castillo San Felipe – one of the oldest structures in Barranquilla, built to defend the city from a siege – and then ended up at the Boca Grande mall for some yummy desserts. Went back to the hotel to change, and then did a Chiva Loca tour at night (“crazy goat” party bus, no actual goats involved) which was super fun. I’d always wanted to do one in Santa Marta, but it never panned out, so this was my first Chiva experience, and it was a great introduction. We went out in Getsemani, which is the neighborhood across from the Walled City, where college students and locals typically go out the most. It’s less of a tourist trap than inside the Walled City. We hit up a few bars and after we had our fill, we went back to the hotel, ready to get up early (really early this time) for our Islas del Rosario adventure. 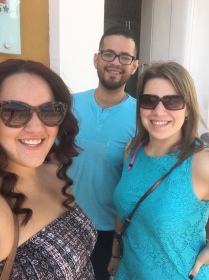 Ready to take on the day! 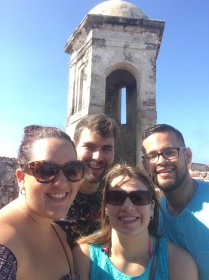 The crew at Castillo San Felipe 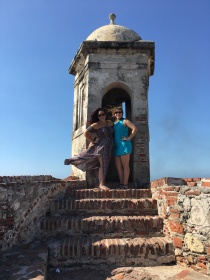 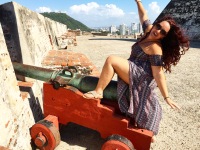 My favorite picture, probably ever 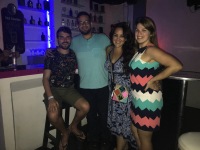 Out and about at some bar in Getsemani

As I mentioned earlier, I have lots of experience riding boats to beaches in Santa Marta from before I could even speak. It’s normal, chill and totally not scary, even though the boats are super dingy and old, I know the drill. Those are my people. Cartagena though, is a whole other animal. Santa Marta’s 5-10 minute coastal boat rides have nothing on this open water hour-long business. First, you have to outsmart the people trying to hustle money out of tourists around and outside of the Walled City. Being from Colombia and having our local friend there was huge in not letting these people screw us over (they still kinda did, but it would’ve been so much worse if we weren’t aware of their tactics). So, the trip works like this: you leave at 9:00 am on a speedboat that takes you outside of Cartagena’s water limits, into the open water of the Mar Caribe. The ride to the first stop is about 45 minutes. My friend Iselle and I were not big fans of this speedboat, as you can tell the drivers are a little reckless and just wanna get to the islands fast. We were holding on to the poles for dear life, and the waves were very high so the boat bumps were no fun. Ian, on the other hand, loved it and felt he was being rocked to sleep… different strokes! When you’re sold on the tour, you’re told you’re going to make 2-3 stops. Playa Blanca (white beach), the Aquarium, and another beach on the way back. As soon as we boarded the boat, they told us we wouldn’t be able to go to Playa Blanca because of the tide, so we’d go to the Aquarium instead, and if we didn’t want to go in there, we could swim elsewhere. Once we made it alive to the islands, the story changed and they wanted to charge us to do the aquarium or another snorkeling activity. Jesus (our local friend) and I fought these guys and did not let them screw us over, until they took us to a nearby spot where we could swim as we were promised. After that, we started heading back towards Cartagena for our second stop, when the boat died mid-ride, in the middle of the open sea, with a lottttttt of waves. Thank God I’m not one to get seasick, because that was enough rocking to make anyone throw up. The crew managed to get the boat running just enough to get us to the next stop, which wasn’t the pretty beach we were promised, but rather a murky shallow stop in a small town. Kids are coming up to you constantly begging for coins, it’s honestly so sad. We had lunch there, which was included in the price of our boat ticket, and after an hour or so, we headed back and I’ve NEVER BEEN SO HAPPY to be done with a tour, and ALIVE! I legitimately feared for my life, and it wasn’t just paranoia. A couple of weeks before we were there, a boat tipped over and at least one passenger died. It’s not uncommon for those accidents to happen, as those boat drivers seem like they’re actively auditioning for Fast & Furious, Cartagena Drift… Anyway, after this adventure, we went back to the hotel to shower and change, and then headed to a restaurant that was recommended to Iselle by her coworkers called La Vitrola. So, so good. We were almost turned away because the place gets packed and requires reservations, but we managed to make it in. The food was delicious and the service stellar, couldn’t have asked for a better last night in Cartagena. Afterwards, we went out to hit up all the random bars we hadn’t visited during the first two nights, and went back to pack and get ready for our return home. Ian would be flying out at 5 am, I was flying out at 7, and Iselle at 11. 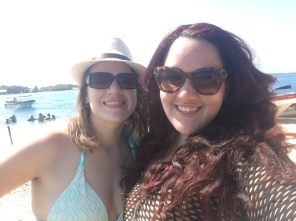 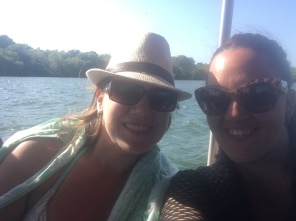 Much happier to almost be back and not have to be on this boat any longer! 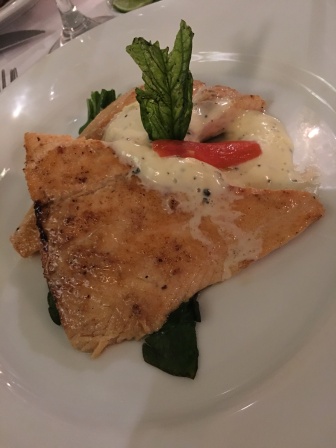 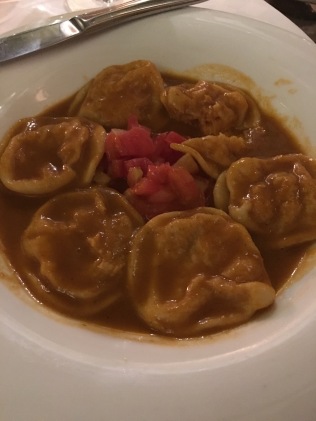 Another great dish from Vitrola 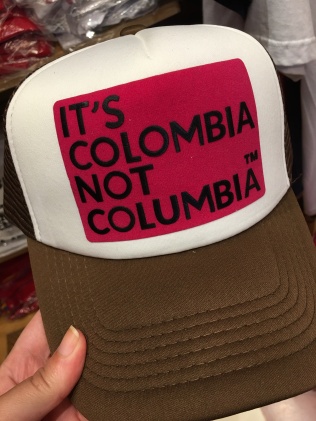 The best merch there ever was!

Thanks for the memories, Cartagena!